The Parkinson’s Foundation is built on community.  The Foothills Area YMCA is a local community partner that is proud to offer an essential resource for those living with Parkinson’s and their families.  Join us in the “FIGHT” against Parkinson’s by supporting the Foothills Area YMCA and Rock Steady Boxing.  Rock Steady Boxing gives those living with the disease hope by improving their quality of life through a non-contact boxing based fitness curriculum. Our Rock Steady Fighters engage with our specially trained coaches weekly for these special fitness sessions.

The Foothills Area YMCA offers this program FREE to all Fighters and their families. Please donate to sponsor a fighter and put yourself in their corner!
DONATE

FIGHTING BACK AGAINST PARKINSON'S DISEASE
One Punch at a Time!

Rock Steady Boxing enables people with Parkinson’s Disease to fight their disease by providing non-contact boxing style fitness classes that improve their quality of life, sense of efficacy, and self-worth. Recent studies also suggest this intense program may be “neuro-protective” working to delay the progression of the symptoms.

Exercise is Our Partner in This Fight!

By providing encouragement through a “tough love” approach, it inspires maximum effort, speed, strength, balance, and flexibility. We will move your body in all plains of motion while continuously changing the routine as you progress through the workout. Our classes have proven that anyone, at any level of Parkinson’s progression, can lessen symptoms and lead to a healthier and happier life.

Our fighters work on agility, speed, muscular endurance, accuracy, hand-eye coordination, and footwork–all while working at or beyond their perceived limitations. But more importantly, we have fun together, laugh, and build relationships with others fighting Parkinson’s disease. 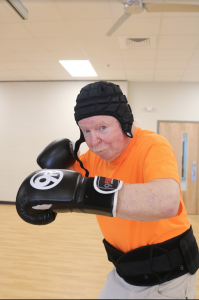 Have you ever wondered what your future will be like now that you or your loved one has been diagnosed with Parkinson’s? I certainly have but I am told that there is no “one size fits all” answer. There is also no cure as of this date; but all of us with Parkinson’s hope that cure will be found sooner rather than later.

Rock Steady Boxing may not be a “cure” for PD but a recent experience has shown me very clearly how much hope for the future this program has given me. My husband and I were recently in the mountains of North Carolina for a week. I love waterfalls and the mountains there have some beautiful waterfalls. We were staying in Linville, NC and I had read about Linville Falls and the amazing canyon gorge. Round trip hike to a point where you can see both the upper and lower Falls is about 1.5 miles. To do the hike I would have to go alone as our precious but our aging West Highland terrier could not make the hike and we would not leave him alone in the car. Only four months ago, before I joined Rock Steady Boxing, I would not have considered doing this hike alone or maybe not at all!

Now, I not only did the hike but I greatly exceeded what I thought was possible for me! With the hiking sticks that I had learned to use in the Rock Steady class, the skills we work on in each class, and the positive attitude instilled by the coaches, off I went. The trail was dirt and gravel but well maintained. There were many elevation changes and even two flights of steep wooden stairs. I made three stops along the trail to enjoy the views and take a few photos. The round trip was completed in one hour. Yes, I hurried because I did not want to leave Hubby and dog waiting any longer than necessary.

How did Rock Steady help me not only accomplish this hike but also finish it with more self confidence and skill than would have been possible before starting the program? My stamina, muscle tone and balance greatly improved over the four months that I have been going to Rock Steady Boxing! Just three classes a week with our wonderful coaches and assistants pushing, guiding and encouraging has made me stronger and more self confident than I thought was possible. To top it off is the fact that the classes are fun! If that is not enough, the friendships we develop with our Parkinson’s buddies in class is like the icing on the cake! In other words, there are no down sides or negatives to Rock Steady Boxing! It is all POSITIVE.

We’ve followed a rather unreal road to “Rock Steady” boxing, getting there on our second incarnation in Clemson.

I have been diagnosed with Parkinson’s almost 20 years, and grateful for apparently having contracted a slow developing “brand”. And yes, we moved to Clemson for the second time toward the end of 2010. We were in Clemson for approximately 14 years, several of those years I was Head of the Mathematical Sciences Department. But alas and alas I was smitten by the “be an academic leader" virus, and I moved to be the Dean of Sciences at Old Dominion University. But I was consistently being asked to consider the “next step”, and we moved to Greenville, NC, where I became Vice Chancellor for Academic Afairs, Chief Academic Officer, at East Carolina University. That was followed by becoming Chancellor of the University of Illinois Springfield, the newest member of the University of Illinois' system of four Universities. That was the epitome. With the support of the U of I trustees, we were to build a “public liberal art university" right there in the capital of Illinois, home to Abraham Lincoln. Deeply satisfied and proud of what had been created we decided to leave UIS after about 10 years. The decision as to where to spend our retirement years colored over in orange almost immediately, and we skeedaddled back to Clemson!

Rock Steady Boxing was new to us when we came back “home,” but are pleased to have the chance to use exercise to beat back the nasty "Captain P”. We surmise that the many pops at the boxing bags might have been helpful during my working days. Think of the value added to my jobs the ability to “jab, cross, upper cut, hook!!!” would have brought!

As a cornerman, I love to exercise with my husband. It enables me to see what he does, so that I can help him at home when we have to miss class. What I love most about the Rock Steady Boxing Class is the variety of activities that they do to help with balance and muscle strengthening. We not only box, but lift weights and do core and cardio exercise. It is good for both of us.

My journey with Parkinson’s began about three or four years ago. Actually, as my wife and I looked back, I had been experiencing many of the symptoms for several years, but had not noticed. During a visit to my neurologist for a different reason, I inquired about the shaking I occasionally experienced in my left arm. He told me to walk down the hall. I must have shuffled a bit because he confirmed I was a “Parkie.”

My symptoms were not particularly noticeable, at least to me, I resisted taking medication for quite a while. But, I began to notice some progression. The shaking in my arm intensified and the shuffling increased. I began taking a low dose of carbidopa-levodopa, and my neurologist suggested physical therapy. “It can’t hurt to try it,” I thought.

During the six week PT program, my therapist suggested I look into a program called “Rock Steady Boxing.” Somewhere along the way, I’d heard boxing is an effective way to fight Parkinson’s so I pulled up the Rock Steady website. I must admit it was a little intimidating. I used to run a lot and always considered myself somewhat of an athlete. But, my self-image was not in touch with reality. I decided to visit a session to see first-hand what the program was really about.

My initial observation was, while I didn’t think I was as far along with the disease as the participants I witnessed, it would be good exercises. So I joined, thinking maybe I’d try it for a while. It didn’t take long for me to realize that I faced many of the same challenges as everyone else. I began to look forward to the sessions and they became a top priority for me. I even rescheduled my golf days so I would not miss boxing.

I have been participating regularly in the Rock Steady program since November 2019. The three and a half month pause last year at the beginning of the pandemic brought home the message of how important the program has become to me. The exercise regimen is vital to helping overcome and slow the progression of Parkinson’s, but not by any means the only benefit. Working out with others who also have the disease provides opportunities for exchanging information, learning new ways to help deal with it, and making new friends. The dedication of our coaches is incredibly impressive and very much appreciated by all. The support and encouragement they provide, as well as their expertise and patience, adds immeasurably to the total experience.

Three years ago, I was diagnosed with Parkinson’s Disease. I didn’t know much about it and was concerned about how it would affect me in my very active life. Fortunately, I was able to get an appointment with a neurologist that specializes in Parkinson’s. She set me up with medication and said I needed to get into an exercise program. One of my friends told me about the YMCA having a program called Rocky Steady that was designed just for people with Parkinson’s. It has been a great experience for me. The exercises have helped to keep my muscles from stiffening up. It feels good to be with people who are dealing with the same issues as I am. I have coaches and friends that are there to encourage me as I walk with Parkinson’s. I thank God daily for Rock Steady.